Projection of AP McCoy looks over Liverpool from the Liver Building : Grand National 2015 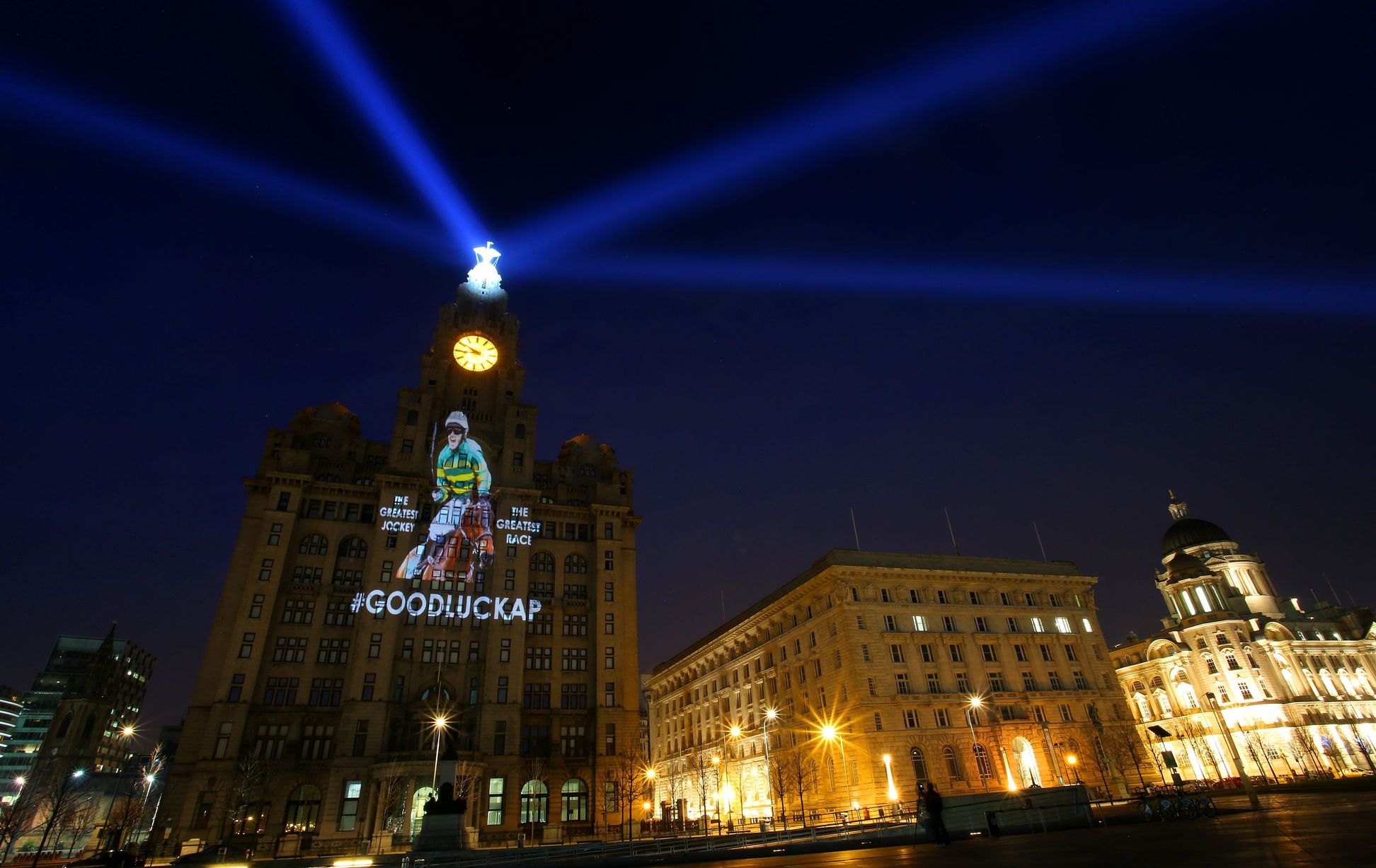 A giant projection of champion jockey AP McCoy looked over Liverpool tonight from the Royal Liver Building ahead of this weekend’s Grand National.As a good luck gesture to the Irish racing legend an image of McCoy was projected on the city’s iconic Liver Building this evening.The champion jockey is set to have his 20th and last ride in the world’s greatest steeplechase before retirement aboard Shutthefrontdoor.When he announced his retirement, McCoy said: “This is without a doubt, the hardest decision I’ve ever had to make. I’ve been dreading this day, and if I’m honest, I still can’t quite imagine a life without racing.“However, I know it’s the right time to end a career I’ve loved, every single day. Even when I’ve fallen and been injured, I’ve been desperate to get back and achieve my goals, achieve the dream I realised when I was a boy but I’m now ready to retire.“I want to go out at top, I want to go out as champion jockey and it will be my 20th year if I can win the jockeys’ championship. I want to go out while I still enjoy riding and am still relatively at the top.”Great British Racing are calling on the city to wish McCoy good luck before his final Grand National by using the hashtag #GoodLuckAP. Also on the Echo Pontins holidaymakers take to Tripadvisor after mass brawl… Speke man Callum Willcocks to face trial over death of… Gran jailed after cocaine found in kitchen cupboard Court orders gangster to pay back £1Promoted Stories The Voice’s Ricky Wilson Attacks Fellow JudgesEntertainment Daily 20 Male Celebrities Who Have Spent Time Behind BarsLOLWOT Retailers Hate This! They don’t want you to find out this…Money Expert What Happened to Billy Idol? Plus 13 More Celebs Who Are…Buzzlie Video: 3D Printed Prosthesis Help Derby the Dog Run for the…Shapeways Retailers hate this! They don’t want you to find out about…Megabargains 24 Celebrities you didn’t know were gayCelebstars What exactly is your landlord responsible for?Shelter AdviceRecommended by Click here to view our community standards

via Grand National 2015: Projection of AP McCoy looks over Liverpool from the Liver Building – Liverpool Echo.